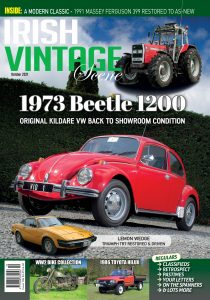 Gracing the cover of the October 2021 issue of Irish Vintage Scene is an Irish-assembled 1973 VW Beetle that remained with its first lady owner for an amazing 45 years. After being sold in 2018, it’s only moved a few miles from its original home and remains in Co. Kildare, in a collection that also includes a 1967 MGB GT and a 1954 Morris Minor that we also take a look at here. Our second car feature also takes in a look at the owner’s collection, but focuses on their recently-refreshed Triumph TR7 in its original and very eye-catching shade of yellow.
Our tractor feature this month tells the story of a recently-restored Massey Ferguson 399, a modern classic that made quite an impact in the agri industry when introduced in 1986. Our motorcycle feature takes a look at the four military motorcycles of a long-time WW2 enthusiast (Matchless WD G3L, BSA M20, BMW R75 and Zundapp KS750), while our commercial feature tells the tale of a 1986 Toyota Hilux that’s been proudly restored by a young enthusiast as his first work vehicle.

All of the usual favourites are in there too, so don’t miss out – pre-order your October 2021 issue of Irish Vintage Scene right here and receive it before it’s in the shops, with FREE POSTAGE on the island of Ireland! 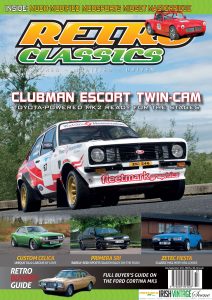 The July to September 2021 issue of Retro Classics hits the shop shelves on Thursday the 1st of July, but you can PRE-ORDER it right now and receive it to your door with FREE POSTAGE! As always, we’ve a diverse selection of fast classics for you to peruse, with this issue’s cover going to a Ford Escort Mk2 rally car that’s been the ten-year dream project for its two owners. After putting a con-rod out of the original crossflow back in 2009, they’ve rebuilt their precious competition car with a twin-cam Toyota 4AGE on Jenvey throttle bodies, six-linked rear end and a host of other upgrades, and are itching to get it back out on the stages.

An absolutely stunning 1975 Toyota Celica also features in this issue, the result of a whole lot of metal fabrication work by its skilful owner. The MG Midget we bring you isn’t the cute roadster you’re familiar with, as it’s much modified beneath with space-frame construction, radically altered engine position and 125bhp A-series power. The Zetec-powered Mk2 Fiesta ‘XRZ’ is a beautifully-built example that’s now the first retro classic of an enthusiastic young owner, while a funky sixties Plymouth Belvedere police cruiser and a now-rare Nissan Primera P10 SRi round out another very varied issue.

With a detailing guide to help you rejuvenate your car’s plastic trim, a look back at the quirky car ads of decades past and a buyer’s guide on the iconic Ford Cortina Mk3, there’s plenty to get your teeth into in this issue of Retro Classics, so don’t miss out – click here to pre-order your copy online, with FREE POSTAGE on the island of Ireland!