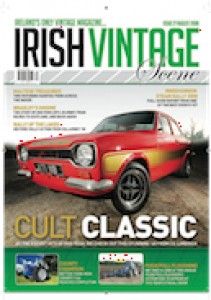 –       CULT CLASSIC: The Ford Escort Mk1 is one of the most sought-after classic cars around, and John Maher’s minter-than-mint ’68 model shows us exactly why they’re so popular.

–       ESCORT 40TH BIRTHDAY: John O’Connell marks the occasion of the fortieth birthday of one of Ford’s all-time greats.

–       DORSET STEAM RALLY GUIDE: Jackie Edge gives us a practical guide to attending the biggest steam fair of them all.

–       FORD RARITY: We take a look at the highly unusual push-pull Ford ploughing system, to be demonstrated at this year’s Fingal Vintage Show.

–       FERGUSON MEMORIAL GARDEN: Owen Monahan brings us news of the new Harry Ferguson Memorial to be built at his home farm in Growell, Co. Down.

–       THERE’S NO PLACE LIKE HOME: This Fowler steam engine has recently returned home to Ireland after moving to Scotland many years ago.

–       PLUS: All your monthly favourites like Dealers’ Wheels, Tales from Over the Water, Ten Best, Laid to Rust, Event Round-Up, News & Events, Diary Dates, Your Letters, Pastimes, classifieds and lots, lots more!