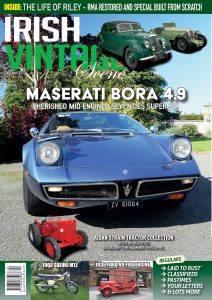 We’ve an exotic treat for our readers on the cover of our April 2022 issue. The Maserati Bora was one of the most advanced supercars of the early 1970s, boasting not only a glorious 4.9-litre quad-cam V8 engine mounted in the middle, but all manner of sophisticated Citroen technology as the French giant had bought a controlling interest in the Italian sports-car maker in 1968. This early example is owned by a Dublin enthusiast, who has been gradually fettling its condition in his ownership. Our second car feature continues with the sporting theme but in a very different way, as one Riley fan outlines how he built his own special sports car from the burnt-out remains of a 1930s Riley.

Our tractor feature this month is a change from the norm, as it runs us through just some of the amazing collection of Aidan Strain from Co. Down, which is to be auctioned off by Cheffins on the 2nd of April. The massive collection runs from commonplace Masseys and Fords to true rarities from County and Roadless, plus probably the best line-ups of classic Internationals we’ve ever seen. Our two-wheeled feature tells the story behind the restoration of a beautiful little 1960s Suzuki Supersport 50cc, while our commercial feature looks at a true local treasure in the shape of a 1936 Ford V8 fire engine that’s been part of Carlow’s history since new. 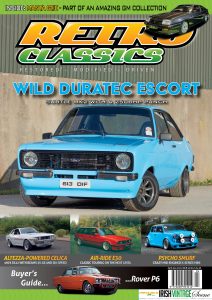 The April to June 2022 issue of Retro Classics goes on sale shortly at good newsagents nationwide, or direct from us by ordering online with FREE POSTAGE. As always, we’ve a diverse selection of fast classics for you to peruse, headed up by a subtle Mk2 Escort packing a 250bhp Duratec punch. Further into the mag, we also feature a BEAMS 20-valve-powered Toyota Celica TA22 that’s been a labour of love for its owner, a BMW E30 Touring on split-rims and air suspension, an absolutely insane mid-engined Mini and one of the most enviable classic Opel collections you’ll ever see.

With a detailing guide on the ins and outs of rotary polishers, a look back at the quirky car ads of decades past, a buyer’s guide on the Rover P6 and a return to event reports at last, there’s plenty to get your teeth into in this issue of Retro Classics, so don’t miss out – – pre-order a digital edition, click here to pre-order a copy online, with FREE POSTAGE on the island of Ireland, or watch out for it at all good newsagents from the 1st of April.