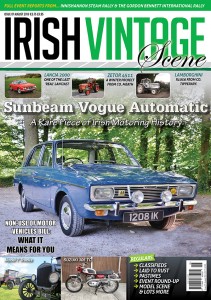 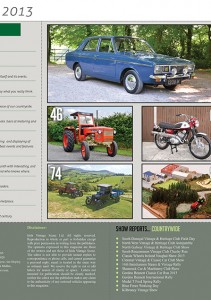 The August 2013 edition of Irish Vintage Scene (Issue 87) is on sale now, and as usual is packed with a wide variety of fascinating features. On the cover this month is a rare treat; the Sunbeam Vogue is a very scarce model in its own right, but the one we feature this month is very unusual in having an automatic transmission. Add to the mix the fact that it’s an original Irish example and you’re left with a car that is more than likely the only survivor of its kind! Moving further into the magazine we also take a look at the saloon and coupe versions of the Lancia 2000, one that enthusiasts consider to be the last of “the real Lancias” before Fiat’s 1969 takeover really began to take effect.

Our feature tractors this month are both from continental Europe. The first of these is a Zetor 4511, which was the subject of an extensive restoration last winter at the hands of its enthusiastic owner. In contrast, the other, a big Lamborghini R1056, has survived from new in really original condition, and recently had its cab and interior freshened up to make it a really excellent example of the breed.

Motorcycle enthusiasts will be interested to read about another rare machine this month, a Suzuki 305 TC Laredo, a one-year-only bike from 1968 created at the height of the ‘street-scrambler’ craze. Our commercial feature this month looks at not one, but two Ford Model T pickup trucks (well, technically one is a Model TT), which are soon to embark on a marathon trek around Ireland to raise money for charity.

With a long list of event reports, ranging from the Innishannon Steam & Vintage Rally to the IVVCC Gordon Bennett International Rally, plus all our usual attractions like Laid to Rust, Your Letters, News & Events and lots, lots more, you won’t want to miss the August 2013 issue of Irish Vintage Scene; get yours today!