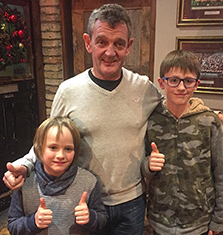 Tommy Byrne is back in Ireland for a few days and has been signing copies of his book in various locations. Tommy dropped into the office yesterday for a visit and while here signed a few copies of his book which we now have on sale. There is a very limited supply , so when they’re gone they’re gone! Don’t miss out; order yours today.

was the best of them all’  Eddie Jordan 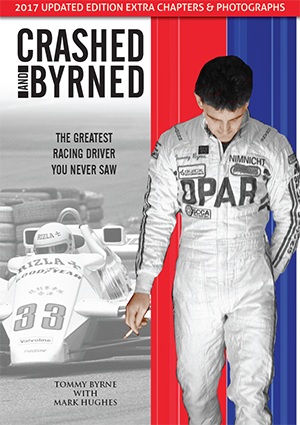 A surreal tale of a poverty-stricken Dundalk kid’s rise to become the only racing driver the great Ayrton Senna ever feared – and how it all went wrong from there. For a brief moment Irishman Tommy Byrne was arguably the world’s greatest driver, the motor racing equivalent of George Best and Muhammad Ali rolled into one. A racer, a thief, a raconteur.

This is the story of his improbable escape, his rapid rise and his spectacular fall from grace. Peppered with dark humour and a cast of ridiculous characters, it is the antithesis of a fairytale – and it’s all true.  Hold on tight, the tale of Tommy Byrne is quite a ride – from fending for himself as the runt of a big Catholic litter in the ‘60s, to running the gauntlet of the sectarian violence of the ‘70s, troubling Ayrton Senna and making it to F1 in the ‘80s, resorting to drugs in the aftermath and driving for a deluded billionaire madman and then gun-toting Mexicans in the ‘90s.

It’s raw, passionate, and – with Byrne’s ability to tell it like it is – not for the faint hearted.