Some 125 years ago – shortly before Christmas 1895 – the mechanic Václav Laurin and the bookseller Václav Klement laid the foundation stone for the present-day ŠKODA AUTO. The two founders were united by their passion for cycling and wanted to offer their customers bicycles built from the best materials available, while still being affordable. In their small workshop three people were employed to make bicycles driven by foot or hand. One year later, 21 employees were making five different models of bikes, which bore the name SLAVIA. The range was soon expanded to include bicycles for children, tandem bicycles, two-wheelers with chain or shaft drive, and tricycles for transporting goods or people. 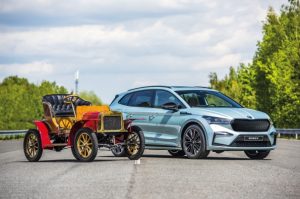 At the end of 1905, the company from Mladá Boleslav presented its first automobile: the Laurin & Klement Voiturette A. The light and manoeuvrable design from Bohemia had a one-litre two-cylinder engine and travelled at speeds of up to 40 km/h. Less than a year after entering the automobile manufacturing business, the range included a wide variety of two- and four-cylinder models and the first eight-cylinder vehicle manufactured in Europe, the Type FF of 1907. Three decades after the company was founded, Laurin & Klement merged with a strong strategic partner in 1925: the Pilsen-based engineering group Škoda. On 16 April 1991, ŠKODA became the fourth brand to join the Volkswagen Group. Just as in 1925, the involvement of a strong strategic partner enabled the further dynamic development of the Czech company. Thanks to the cooperation with the globally active German Group, the level of quality increased, ŠKODA expanded its portfolio to include higher-class models; as part of its Strategy 2025, ŠKODA AUTO is actively transforming from a car manufacturer to a ‘Simply Clever company for the best mobility solutions’. In doing so, the company is consistently pursuing the course set by the visionaries Laurin and Klement 125 years ago.