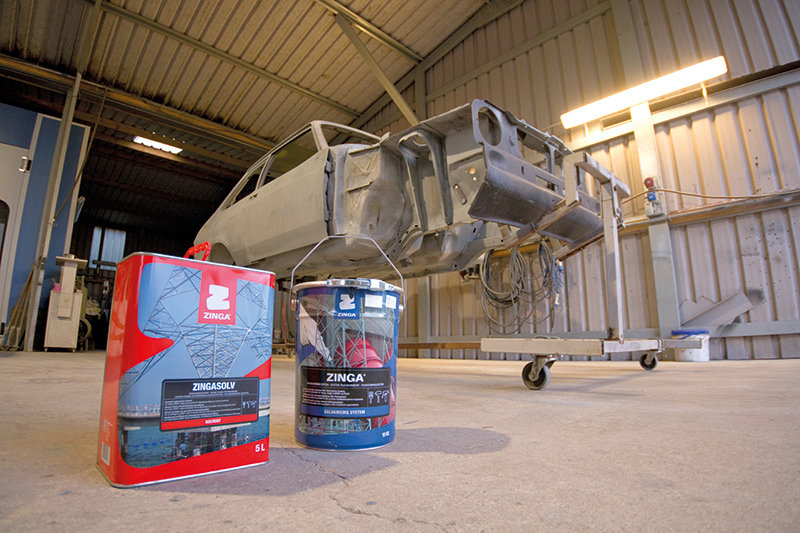 In an ideal world, repairing and driving vintage and classic vehicles would all be about tinkering relaxingly on the odd nut and bolt, rubbing a bit of polish on the paintwork and thinking about where to drive it for a nice Sunday lunch. But, the reality usually comes down to one thing, and that’s the constant battle against rust. Whether you’re replacing rusted body panels, removing surface rust or trying to keep rust from reappearing on your restored pride and joy, it’s all about understanding how steel reacts to moisture, and what you can do about it.

One method of rust-proofing steel that’s been used on an industrial scale for decades is that of hot-dip galvanising, where the steel is dipped into molten zinc. This is very effective in protecting the underlying metal as not only does it form an outer barrier, like paint would, but the more reactive zinc is also chemically able to protect the metal by corroding sacrificially before the metal begins to rust, therefore providing many years of corrosion resistance. However, hot-dip galvanisation by its nature is a large-scale, very high temperature industrial process that isn’t easily applied to car bodies, vehicle components or the like, so the search for the perfect rust-proofing product continues…

Or does it? A product called Zinga claims to be a form of cold galvanising (also known as film galvanising) as no heat is involved – the product is simply painted onto clean metal, but can protect it in a similar way to hot-dipping. Developed in Belgium, Zinga’s been around since the 1970s, when it was conceived as a touch-up product for use on large metal structures like bridges and towers that couldn’t realistically be disassembled and popped into a vat of molten zinc. Zinga is very rich in zinc (in fact it’s 96% dry zinc), and offers the same kind of galvanic protection as hot-dipping but applied in ambient temperatures by brushing, rolling or spraying. Being not a paint but a metallic coating, it has an unlimited pot life, and doesn’t skin over or go tacky like paint. The product was soon recognised as being of far more use than a simple touch-up, and since its introduction it’s gone on to be used in a myriad of applications, ranging from coating the inside of submarines to protecting North Sea oil rigs, with a long list of industrial and military certifications to its name.

Thanks to the efforts of Brendan Igoe of Igoe International in Dublin (best known for their range of Owatrol rust-proofing products), Zinga is now available in Ireland, and its benefits for the old vehicle restorer are pretty obvious. To see for ourselves just what it’s capable of in the real world, Brendan pointed us in the direction of Kieran O’Brien of G&D Garage in Dunmanway, Co. Cork, a professional car restoration business that’s been using Zinga for a good while now, with excellent results.

On the day of my visit to their workshop I was met with a number of classics undergoing various stages of bodywork, but most impressive was the sight of a 1963 Mercedes W112 cabriolet bodyshell that had been completely stripped and media-blasted back to bare metal to identify what repairs were required. Keeping a blasted shell from rusting almost instantly is a constant problem for many restorers, but Kieran explained to me that this is where Zinga really shines. “When we media blast a shell we apply the Zinga to the clean, bare metal as quickly as possible” he outlined. “As we would generally be doing a whole body at a time, we would thin it out and spray it on. It’s pretty straightforward, but a thing to watch out for is making sure the Zinga is mixed properly – as it is such a heavy liquid all the good stuff tends to stay down the bottom, so before use it we turn the tin a few times. We think this helps a lot before you start mixing. Also, you can apply and reapply it as much as you like, but I wouldn’t overload the panel – try and use even coats. It dries quite quickly, so reapplying isn’t an issue.”

With a couple of restoration projects on the go back at home, I was keen to ask Kieran if Zinga can also be brushed on easily, as many home restorers like myself wouldn’t have access to proper spraying equipment, nor the experience to use it properly. “We have brushed it onto areas where we are carrying out a repair and want to top it up with the Zinga afterwards, so it’s easy and quick to use, being both sprayable and brushable” he confirmed. He also pointed me towards another bare shell being stored in the workshop, that of a Mk2 Escort RS2000, which he told me had been media blasted a full year ago, but is holding up perfectly since then after being treated with Zinga. “Zinga is ideal in any ongoing project, as we all know they can take some time to complete” he explained. “It’s the perfect product to hold the bare metal while the project is ongoing, as it keeps the metal protected, you can weld through it, you can prime and paint over it, and it can be topped up easily for any reason.”

Duly impressed with the Zinga, before I left I had to ask if Kieran used any of Igoe International’s other products, such as their Owatrol rust-proofing oil. “We use the Owatrol CIP [Corrosion Inhibiting Primer] and the Owatrol oil itself where it’s not possible to blast, such as on vehicle underbodies or other hard-to-reach places” he told me. “They are very versatile products and have a wide variety of applications where rust is concerned. From what we’ve seen, they really do hold back the rust! The CIP can be two-pack primed or painted over with any type of paint, so again a brilliant product and making the impossible possible where rust has started to set in. We also use the Owatrol Transyl penetrating oil on a daily basis, and we find it gets into places the other brands wouldn’t, giving it an hour or two in very rusty situations. My father is in the motor trade with fifty years and he said it’s better than anything he has used.”

There are many rust-proofing products out there that are aimed squarely at the old vehicle restorer or owner, some of which are excellent and really do what they say on the tin. However, the cold-galvanising qualities of Zinga really sound like it’s in a different league to most – it’s available from Igoe International in various tin sizes and even a handy aerosol, and having heard about its merits from a professional that’s using it on the coalface I’m looking forward to trying it out in the garage myself in the coming months.

For full information and pricing details for Zinga and Owatrol products, contact Igoe International in Glasnevin, Dublin on 01 8302250 or see their website and online shop at www.igoe.ie.

Irish Vintage Scene would like to thank Kieran O’Brien of G&D Garage for his time in the making of this advertorial. For details of their restoration and bodywork services, call 023 8845754 or see www.ganddgarage.ie or their Facebook or Instagram pages.