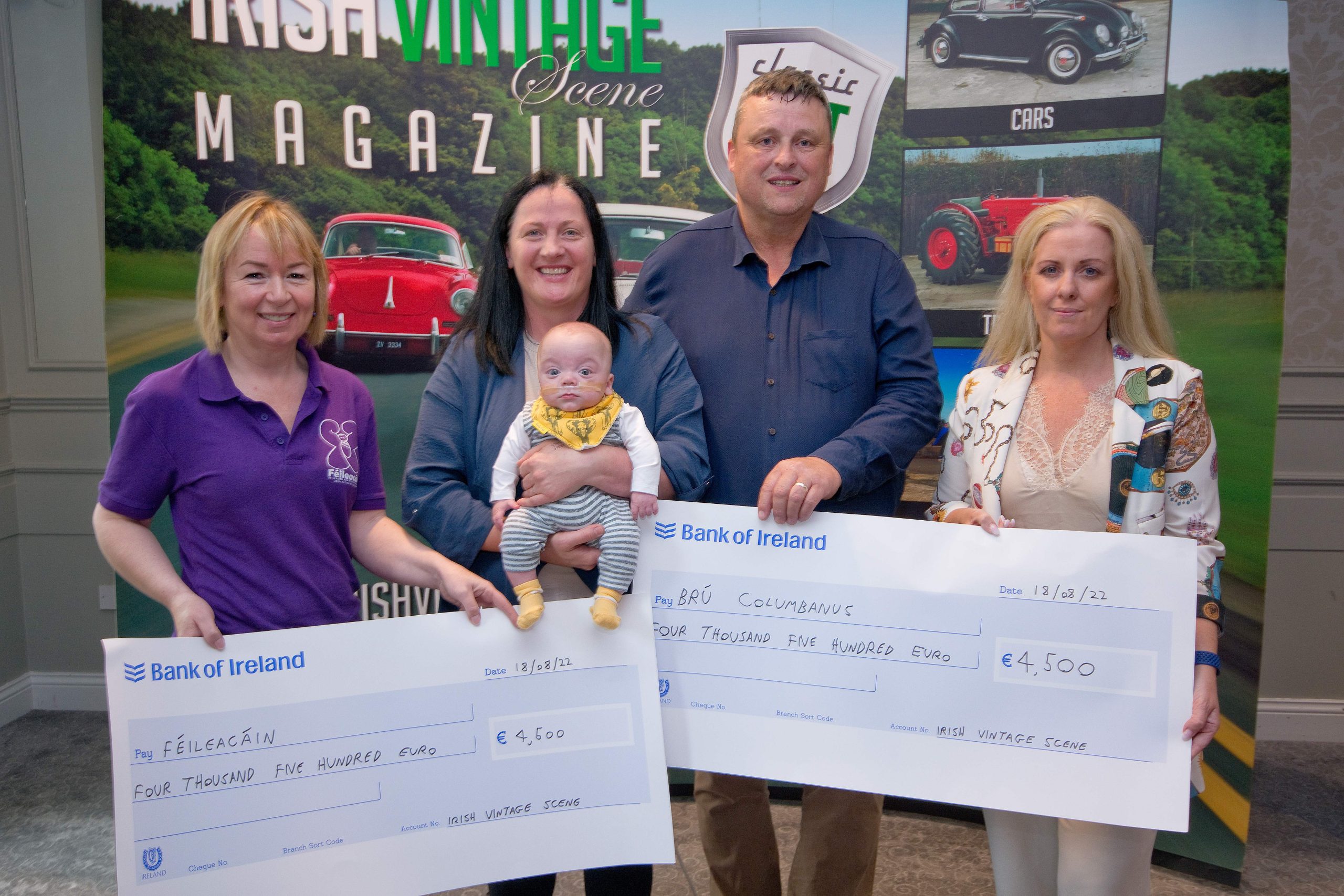 Sunday the 3rd of July this year famously saw hundreds of classic vehicles and thousands of members of the public descend on Galway Racecourse for Classic Fest 2022, hosted by Irish Vintage Scene Magazine. One of the largest events of its kind to take place in Ireland this year, the event is the brainchild of our own Tom Heavey, who not only lost his daughter, Emma to cancer earlier this year, but also one of his newly-born twin-grandsons, Emma’s son Danny. To show his gratitude to two particular charity organisations that had supported Tom, Emma and their family during such a difficult time, Tom chose Brú Columbanus and Féileacáin as the two beneficiaries of proceeds from the Classic Fest show.

On Thursday the 18th of August at the Oranmore Lodge Hotel in Galway, Tom was delighted to present to both Anne-Maria O’Connor of Brú Columbanus and Jacinta Murphy of Féileacáin a cheque for €4,500 each, as a result of the generosity and support of the exhibitors and exhibitors of Classic Fest 2022. Speaking at the presentation, Tom praised the assistance of all of the volunteers that had worked so hard on the weekend of the show. “We do what we do for the enjoyment of vintage and classic vehicles, but it’s great to be able to give something back to the charities as well,” he explained. “It was very easy for me to decide on the two charities this year – when we were in Cork we were very well looked after by Brú Columbanus at their fabulous facility down there. Like Brú Columbanus, in January of this year I didn’t know what Féileacáin was, but as soon as Danny passed away Féileacáin came to us, and they were just brilliant. Hopefully none of you will have to deal with them, because if you do it means you’ve lost a child. Nobody really sees what they do behind the scenes, but what they do is so important to a family in that situation.”

PHOTO:
Jacinta O’Connor of Féileacáin (left) and Anne-Maria O’Connor of Brú Columbanus (right) with Tom Heavey, Pauline Naughton-Heavey and their grandson Kai. Kai’s mother Emma and twin-brother Danny passed away earlier this year, prompting Tom to choose these two wonderful charities that supported the family at that time.