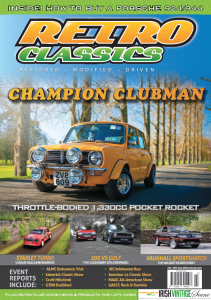 Posted in 2015, Past Issues Retro Classics.

The July to September 2015 issue of Retro Classics Magazine is now on sale, and as always is packed with features and event reports from the world of classic, retro and motorsport cars in Ireland. On the cover of this issue is a Mini Clubman that’s been taken from a cute classic to a track-ready terror by its owner, complete with a 1,330cc engine packing throttle-body electronic injection, an alloy 7-port cylinder head, rally cam, Omega pistons and more. The looks weren’t forgotten either, with a beautiful Bronze Yellow paintjob and some custom split-rim wheels making it a show-stopper. We also look at a fearsome Toyota Starlet hillclimber powered by a turbocharged Vauxhall red-top, and we mark the 35th anniversary of the legendary Audi quattro (yes, with a small q) by taking five fine examples up Donegal’s Knockalla rally stage. A rare Vauxhall Sportshatch also features, as does a mad wide-bodied Corvette C3 and a 1985 Corolla that’s been in the same family since new, but has recently come in for a full makeover including 2.0-litre Celica power. Finally, we pit against each other two of the finest hot-hatches of all time – the VW Golf GTi Mk1 and the Peugeot 205 GTi 1.9 – to see which one has better stood the test of time. We have a massive amount of event coverage in this issue, including the DubShed VW show in Belfast, the Future Classics racing series in Mondello, the Loughgall Festival of Motorsport in Co. Armagh, the Rock & Rumble American car show in Cork and many, many more besides, and we also run you through the ins and outs of buying yourself a Porsche 924/944. Add to all this our Club Scene section, News & Products and Diary Dates listings and you’ve got another jam-packed issue.

Don’t miss out; get your July to September 2015 edition of Retro Classics Magazine at any good newsagent from the 1st of July, or click on the button to buy online! 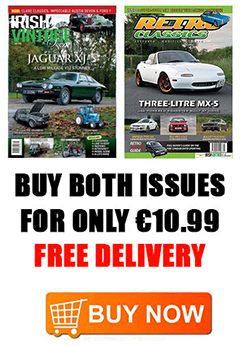