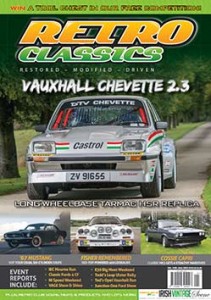 Posted in 2016, Past Issues Retro Classics.

The January to March 2016 issue of Retro Classics Magazine goes on sale today, and as always is packed with features and event reports from the world of classic, retro and motorsport cars in Ireland. On the cover of this issue is a stunning Vauxhall Chevette HSR replica that has caught our eye at several events over the last year or two; even though it looks like an all-out rally car (and was inspired by its owner’s memories of Jimmy McRae tackling the 1980 Circuit of Ireland) it’s been built strictly for road-going fun – with a hot twin-Webered 2.3 under the bonnet, fun it most certainly is! We also take a special look at the phenomenon of the Cosworth 24v-transplanted Ford Capri with a double feature on two absolute peaches – they’re about as different as two Mk3s could get, but are both highly desirable nonetheless. We continue the six-cylinder Ford theme but from a different continent as we check out a distinctive straight-six ’67 Mustang coupe, but open up the variety once again with a supercharged Mk1 Golf, a Bertie Fisher-inspired Opel Manta and a Cooper-style Mk1 Mini with a poignant family history.

We have a simply massive amount of event coverage in this issue, the reports including the VAGE VW Show & Shine, BMW E30 Owners Big Meet Weekend, the Irish Escort Club’s Mourne Run, the Causeway Mini Show in Portrush, Ted’s Opel Vauxhall Run, the Classic & Old-Skool Toyota Run and many, many more besides, and we also run you through the ins and outs of buying yourself a real classic legend, the Volkswagen Beetle. Add to all this our Club Scene section, News & Products and Diary Dates listings and you’ve got another jam-packed issue.

Don’t miss out; get your January to March 2016 edition of Retro Classics Magazine at any good newsagent from the 16th of December 2015, or click on the button to buy online!