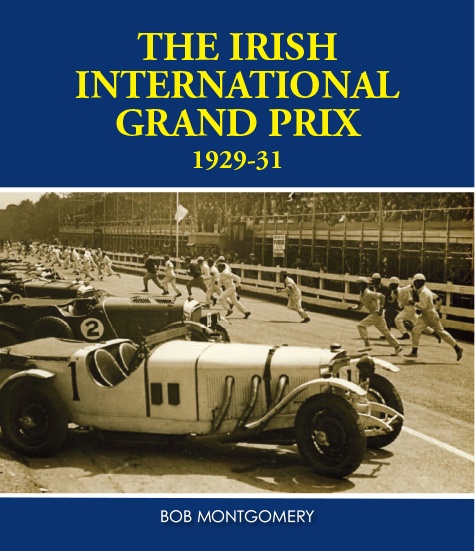 Bob Montgomery, well-known motor historian and author, has published what can only be described as his best book yet, which focuses on the history of the Irish International Grand Prix held from 1929 to 1931. As Bob says in his forword, he has written on this subject before but he always felt that these three historic races deserved a more detailed publication of their own, and he has now completed this in a beautiful, large-format, 236-page hardback book. I personally think this is one of Bob’s best books to date, and the content and the way it is presented is very impressive. All three of the Irish International Grand Prix were organised by the Royal Irish Automobile Club, who appointed Walter Sexton and Edward White to head up the team to run the events. Today we still have the Sexton Trophy, presented in memory of Walter Sexton. Also to play a big part in all of this was the Phoenix Park, and it’s great to see the book starts off with a chapter dedicated to “Dublin’s Great Park”. This is followed by a chapter on the RIAC, and another on the Phoenix Park Speed Trials of 1903, the fi rst motorsport events held in the Park, which has over the years done motorsport proud. A chapter on the circuit and the moving of the Phoenix Monument gives some great photos of works carried out to allow the races to happen. Each of the three Grand Prix get a chapter of up to forty pages, in which each day of the event is listed along with the results. Again the photographs reproduced here are superb. These are followed up with a very thought-provoking chapter entitled “The Aftermath”, which explains how and why the 1931 was the last. Just imagine if these events had been successful, would we today be enjoying an F1 race around our capital? If only. Some good did come from these events in the fact that the Irish Motor Racing Club was formed, and they kept motorsport alive in the Phoenix Park for many years. Of them all, the section on Irish Grand Prix memorabilia is my favourite, where tickets, programmes, press releases, maps, advertising and so much more are reproduced in large, full-page images with superb detail. If you’re a fan of history, early Irish motoring or just good old pictures, then this just-released book should be on your Christmas list. It retails for €50, and can be bought from all good book stores, book resellers and ourselves at Irish Vintage Scene. Review by Tom Heavey