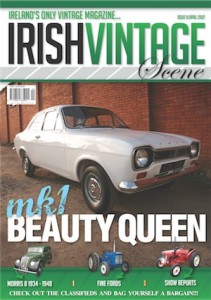 –       BEAUTY QUEEN: This Ford Escort Mk1 has been restored to a scarcely-believable standard, and succeeded in winning the first show and shine it was entered into after completion.

–       NOSTALGIC RESTORATION AT MOYCLARE: John Roche tells us of the restoration of a rare Vierzon water pumping machine.

–       TK BEDFORD: This Bedford truck is an unusual model, as it has the 330 six-cylinder engine and 20” wheels, and it has just received an intensive restoration by its enthusiastic owner.

–       JOHN DEERE: Not a tractor feature, but a look at the man behind the legend, as John O’Connell tells us of the life and times of Deere himself.

–       MAN OF MANY PARTS: Norbert Sheerin brings us the first instalment of the restoration of a rare M.A.N. tractor.

–       EVERYDAY CLASSICS: John Cradden examines the practicalities of running a classic as a daily driver, specifically the BMW 2002.

–       PLUS: All your monthly favourites like Ten Best, Laid to Rust, News & Events, Diary Dates, Your Letters, Pastimes, classifieds and lots, lots more!