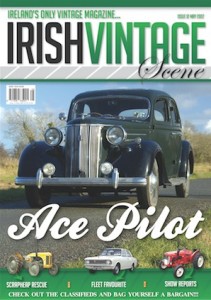 –       ACE PILOT: A rare sight in Ireland, the Ford V8 Pilot was the pinnacle of Dagenham’s most-war sidevalve models. Here, we take a look at a rare, Cork-registered example.

–       QUEEN OF THE ROAD PT.1: Norbert Sheerin brings us the tale of an elegant, RHD Chrysler De Soto 8, which now resides in Castlerea.

–       FLEET FAVOURITE: When Bryan Oliver snapped up this tasty Mk2 Cortina he thought he was getting a 1300 Deluxe, not a rare Fleet model, which is one of very few survivors.

–       JAP-POWERED DEXTA: Justin Roberts meets with Darragh Leonard, who has shoe-horned a six-cylinder Nissan Patrol diesel under the bonnet of his Fordson Dexta.

–       PLUS: All your monthly favourites like Ask the Expert, Ten Best, Laid to Rust, News & Events, Diary Dates, Your Letters, Pastimes, classifieds and lots, lots more!