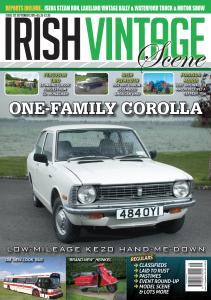 The September 2015 edition of Irish Vintage Scene (Issue 112) is on sale now, and once again is full to bursting with fascinating feature vehicles and show reports from all around Ireland.

On the cover of this month’s issue is a classic saloon that was once a hugely popular car on Irish roads, but sadly has become a very rare sight today, even at classic events; this 1976 Toyota Corolla KE20 is an original Irish example, and was bought new by the great grandaunt of the current owner. What’s more, she bequeathed her beloved runaround to him when he was just seven years old, so the recent completion of the car’s long-running restoration is something of a dream come true for this young enthusiast. Our second feature car couldn’t be any more different in appearance, yet also has an interesting Irish story to tell; this impressive 1959 Plymouth Belvedere limousine was one of a small number assembled new in this country, and its owner has amassed some great information on this almost forgotten corner of Irish automotive history.

Our main tractor feature this month looks at one enthusiast’s trio of classic Ferguson/Massey Fergusons – a TE20, FE35 and MF35X- each one of which is more beautifully restored than the last. The restorations have been a family affair for this young enthusiast, and it’s great to see young blood coming into the hobby in this way. Our second tractor story takes a look at a stunning Fordson Major E1A, which was restored by its experienced owner utilising as many of its original parts as possible to maintain its period correctness.

Moving to two wheels, our motorcycle feature this month looks at one man’s pair of Heinkel scooters, which includes a Tourist with only four miles (yes, four) on the odometer from new, while our commercial vehicle feature tells the unique story of a GM New Look bus that has been brought from Toronto to a new home in Ireland by a small group of committed transport enthusiasts. Closing out a packed issue is the final instalment of our story on a pre-war Morris Cowley Flatnose restoration.

Events-wise we’ve a lot going on this month, ranging from the Limerick Classic Car Show to the Ulster Vintage Commercial Vehicle Club’s Two-Day Run to the Cobh Lusitania Memorial Display and lots more besides, so you won’t want to miss the September 2015 issue of Irish Vintage Scene; get yours today!