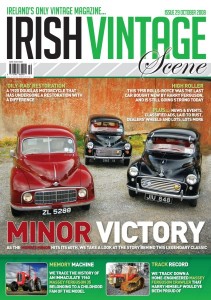 –       MINOR VICTORY: As the Morris Minor hits its sixtieth birthday, we take a look at the story behind this legendary classic.

–       MEMORY MACHINE: Childhood memories of the then-new Massey Ferguson 35 lad Neilie Brosnan to eventually track one down for himself, many year later.

–       OILY RAG RESTORATION: While most people restore their old vehicles to ‘as new’ condition, John Quirke had other plans for his 1920 Douglas 2.75hp motorbike…

–       IT’S A SMALL WORLD: Peter Moore takes us through the trials and tribulations that led him to buy his Series 1 Jaguar XJ6.

–       HIGH ROLLER: Harry Ferguson certainly knew his engineering, and was also a keen aviation enthusiast. It shouldn’t come as much of a surprise, therefore, that Rolls-Royce cars found his favour, not least this Silver Wraith that he bought new in 1955.

–       TRACK RECORD: They say that necessity is the mother of invention, and this certainly rings true in the case of this unique, home-brewed Massey Ferguson 168 crawler from Co. Kerry.

–       PLUS: All your monthly favourites like Dealers’ Wheels, Tales from Over the Water, Ten Best, Laid to Rust, Event Round-Up, News & Events, Diary Dates, Your Letters, Pastimes, classifieds and lots, lots more!